I had high hopes for myself in October. I planned on getting two chapters rewritten and another outlined. I even took several days off this month so I could write during daytime hours. Then, my plans went to shit. A cat died. A member of the house fell sick (not with Covid). Daytime obligations gained priority. I sat down to write, fingers posed over my keyboard, and my watch would buzz with a notification from Signal or Messages letting me know someone needed my attention or just wanted to check in. The distractions, stress, and priorities just kept coming. It hasn’t been this bad since March.

I may have written here before, but this is the challenge of being an author. You have to find the time to write. And if you don’t find the time, you have to make the time. In reality, that’s not always possible. Some days you sit down with the goal of writing 1000 shitty words with the intention of making them pretty (or less shitty) later. But sometimes, a pet dies or a loved one gets sick or the Day Job that gives you the income to continue doing this creative endeavor needs you more. On those days, you bite the inside of your cheek and roll with it. You push away thoughts like, Stephen fucking King doesn’t have to worry about this and if I lived in a cave in the swamp like I’m supposed to, no one would bother me with questions about their goddamn iPhone or pressure me to come to their family events I don’t enjoy. These thoughts, as you know, are just selfish and resentful because:

I have an ambitious writing project. The chapters are long, the themes are dense, the characters are layered. I have an unlimited font of inspiration to write and rewrite it, but my time is precariously short. In the past year and a half, I’ve accomplished so much and I’m so pleased with my progress. I’m so close to the end, but I have more to go. As of now, it’s looking like I won’t finish by the end of this year.

Needless to say, I have to scale back my ambition.

I buried the lede: I did finish a single chapter this month. I also started prepping the next one for rewrites. So, great for a small goal met; I’ll take it this month.

Let’s talk about some good writing, shall we?

I watched two pieces of media that I wanted to recommend as Good Writing. Both of them are completely different from each other.

Before he was a space wizard in Space Wars Laser Swords Pewpew, Alec Guinness was Col. Nicholson in Bridge on the River Kwai. In this movie, he’s a stoic, unyielding, proper British army colonel leading a troupe of captured soldiers at a prison camp in Burma.

This movie captivated me. Watching Guinness, as Nicholson, turn on his soldiers in the slowest, most passive way — all in the name of “what’s proper” chilled me to the core. Compare the scenes of him insisting his officers or the wounded not do manual labor per the Geneva convention to the scenes of him insisting his officers and the wounded do manual labor on the bridge — just to get it done. The tension rises as Shears, Joyce, and Warden set up the bombs around the bridge just under Saito’s guards’ sight. It’s a steady building climax played out in almost no dialogue, either. But everything falls apart when Nicholson notices the detonation wires and leads Saito right to Joyce, and all hell breaks loose. Joyce stabs Saito, Warden shoots Shears, the Japanese gun down Joyce, and the bridge remains intact.

Nicholson, wounded in the fracas, stumbles and mutters the best goddamn delivered line in cinema history: “What have I done?”

If you have not seen this absolute diamond of the Hollywood Golden Age, please see it. It’s worth it for that line alone.

Next up I watched…

On a recent episode of Pop Medieval, I expressed my bafflement at what this show was and why the GenZs were so obsessed with it. I saw the memes but could get no context from them. Also, if you haven’t seen it, I’m going to spoil a few parts.

Holy hell, I was not expecting a brutal takedown of capitalism in ten episodes of Korean horror! Sure, the overarching theme (Capitalism is bad and will kill us all, even the rich) wasn’t subtle, but each episode had motifs and nuances that contributed to the theme. Such motifs/nuances I gathered were:

I’m not sure about the last one, to be honest. In fact, up through the first third of the last episode, I vibed really well with the show. After that…eh, I think I’m missing something. What was with Gi-hun’s hair? How did #001 accomplish…what he did? I completely understood that message (a one-percenter slumming it with the poor to “experience” the struggle but without any of the actual consequences), but, how did he get from the spectators room to the players room? To me, the last two-thirds of the show went from being biting social commentary to being more melodrama. However, the preceding 9 episodes more than made up for it.

Next month is November. I’m kidding myself if I think I’m going to get a lot done next month. I am traveling for the holiday and I’m working on a project for Witan. Hence, I need to redirect that ambition into other things.

I am still focusing on getting a chapter re-written as always, but on only that — a single chapter. December may be a bit more productive as I’m not traveling this year and plan on keeping it low-key. But for next month, my plans are to put on a playlist, turn on the tea kettle, and keep a steady word count.

Author of "Icarus" and "A Bitter Spring." Cohost of the "Pop Medieval" podcast. Cofounder of Witan Publishing. View all posts by Nina MacNamara 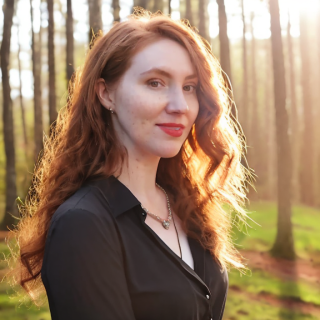